Give Growing Lithops a Try

Leah
Houseplants, Tales from the Sill

Begonia Propagation from Start to Finish

Leah
Propagation, Tales from the Sill

A Whale of a Tale: Sansevieria Masoniana Propagation by Seed

October 19 – I love Sanseviera.  The tall clean lines that shoot up from the base, the dark greens and yellows that zig zag across its leaves.  It makes the perfect houseplant since it takes low light and doesn’t require much watering.  Sansevieria Masoniana or Whale Fin is a large species of Sanseviera that grows a tall, fat leaf that mimics the shape of…you guessed it, a whale’s fin.  Through SmartSeedsEmporium on Etsy, I purchased 5 Whale Fin seeds to see if I could grow this beautiful plant on my own.  These seeds are precious, so for starters, I am going to try one seed and see what happens.  Thanks to some tips from Jamille, I think I am off to a good start: 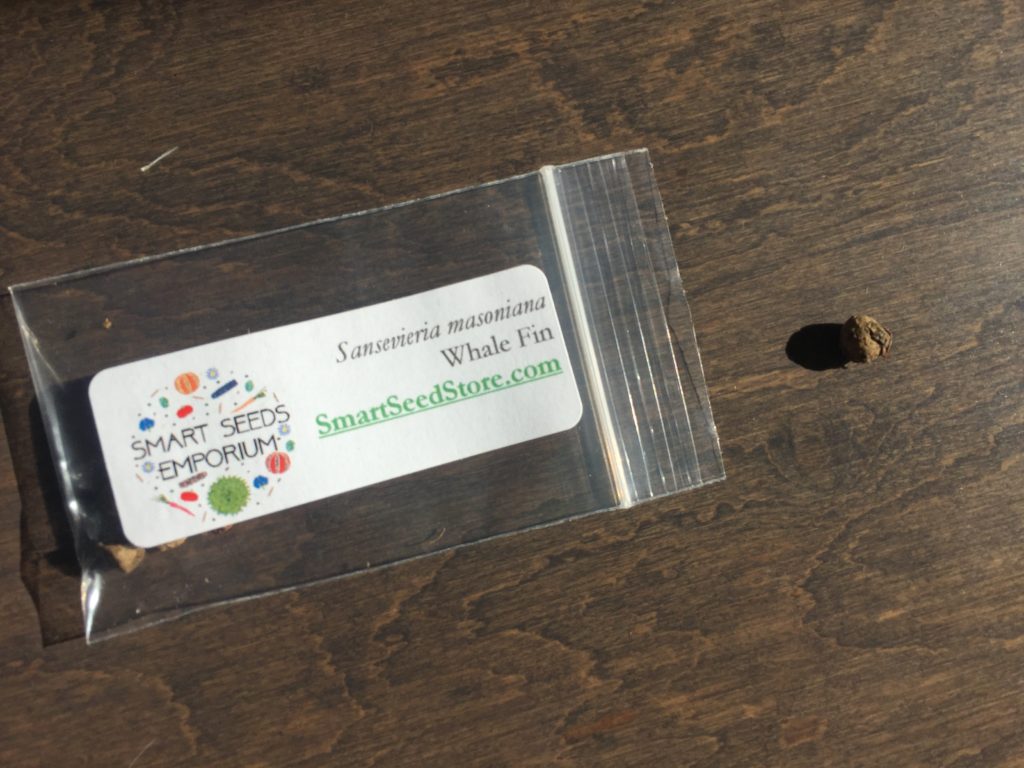 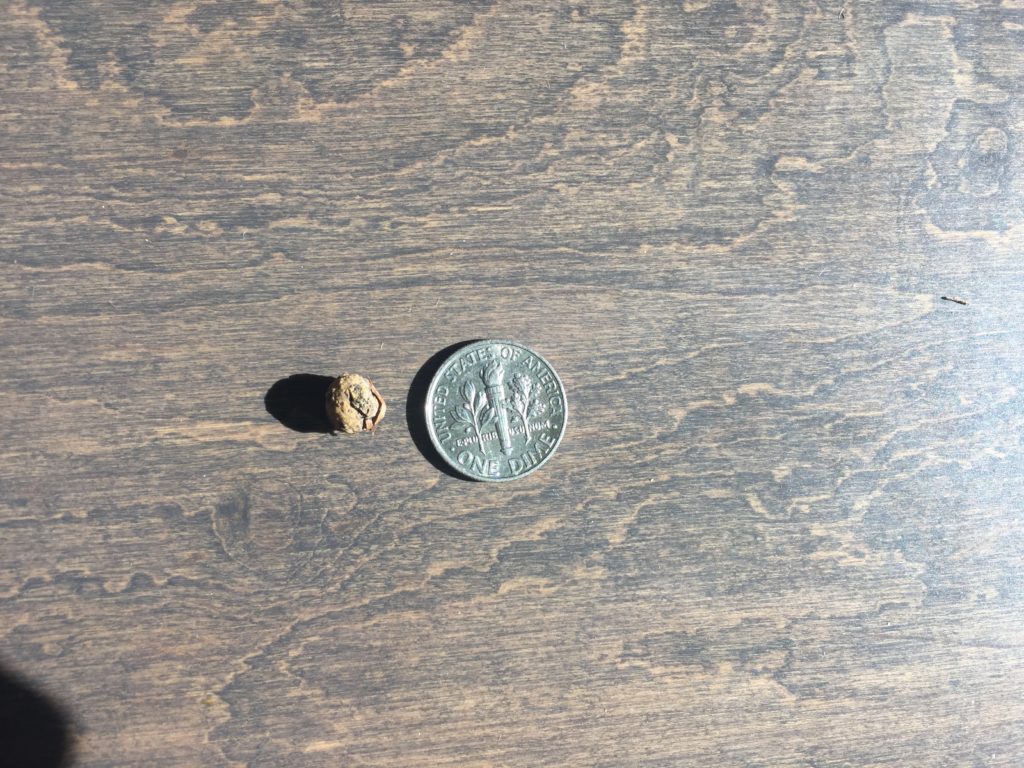 Nick or score your seeds to remove part of the hard shell.  Be careful not to go to deep as you don’t want to damage the seed germ inside.  I use a little nail file, but sand paper will work also.  When you see that the outer shell has been worn a way, STOP! 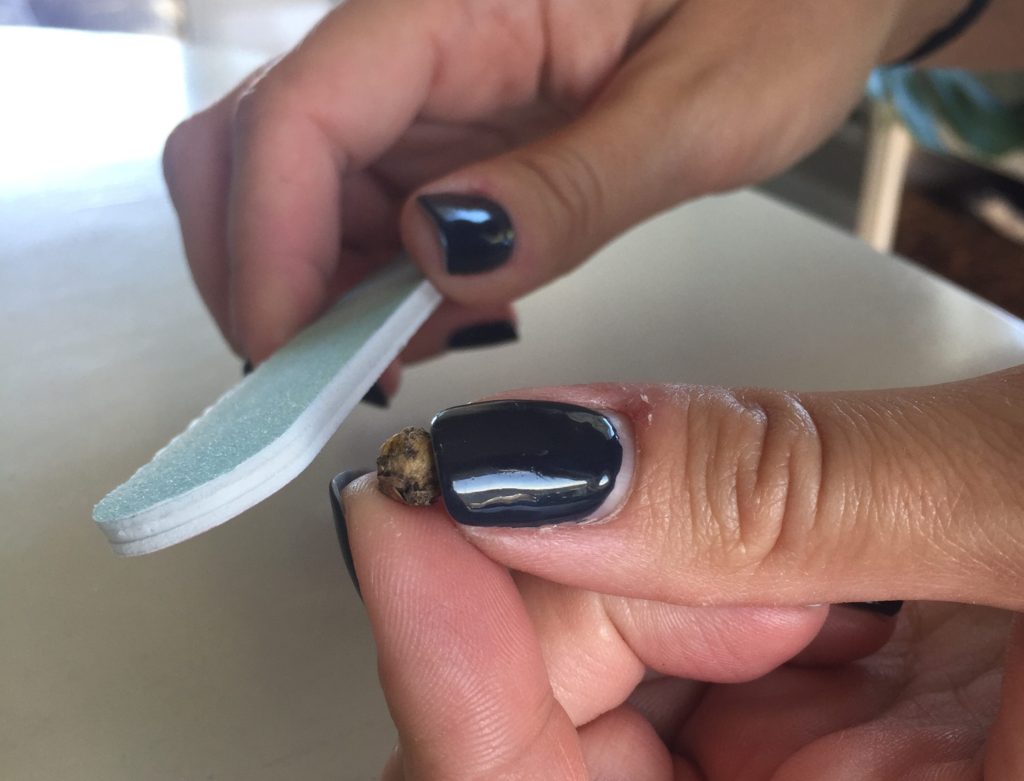 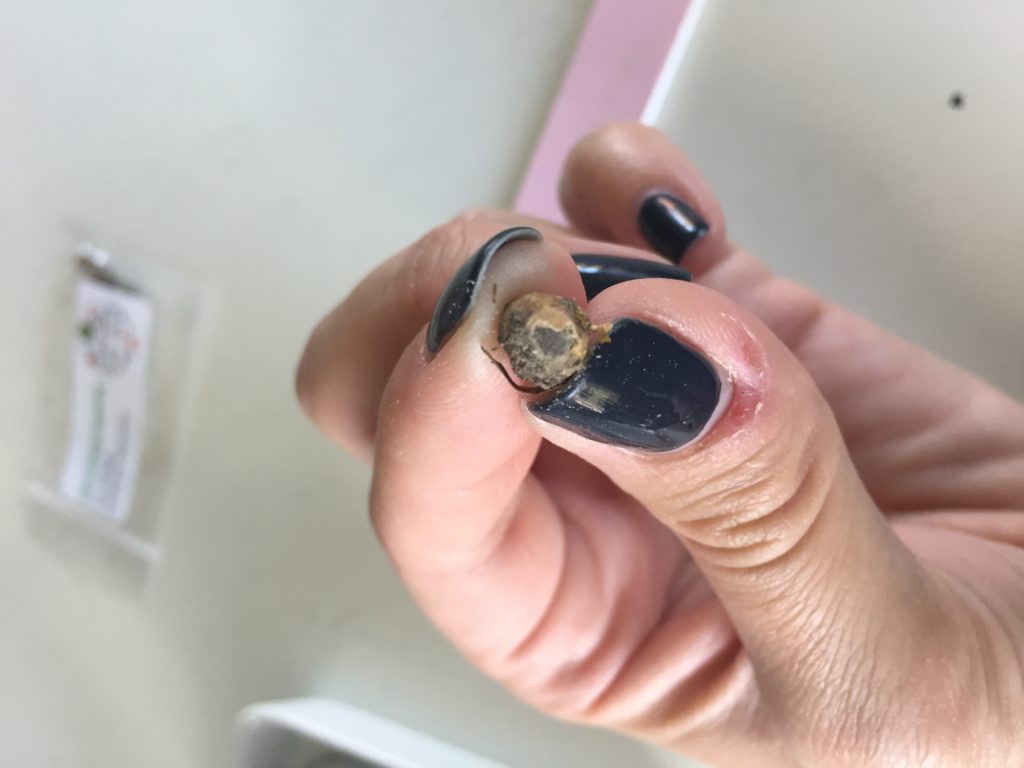 Soak your seed in warm water for 24 hours. 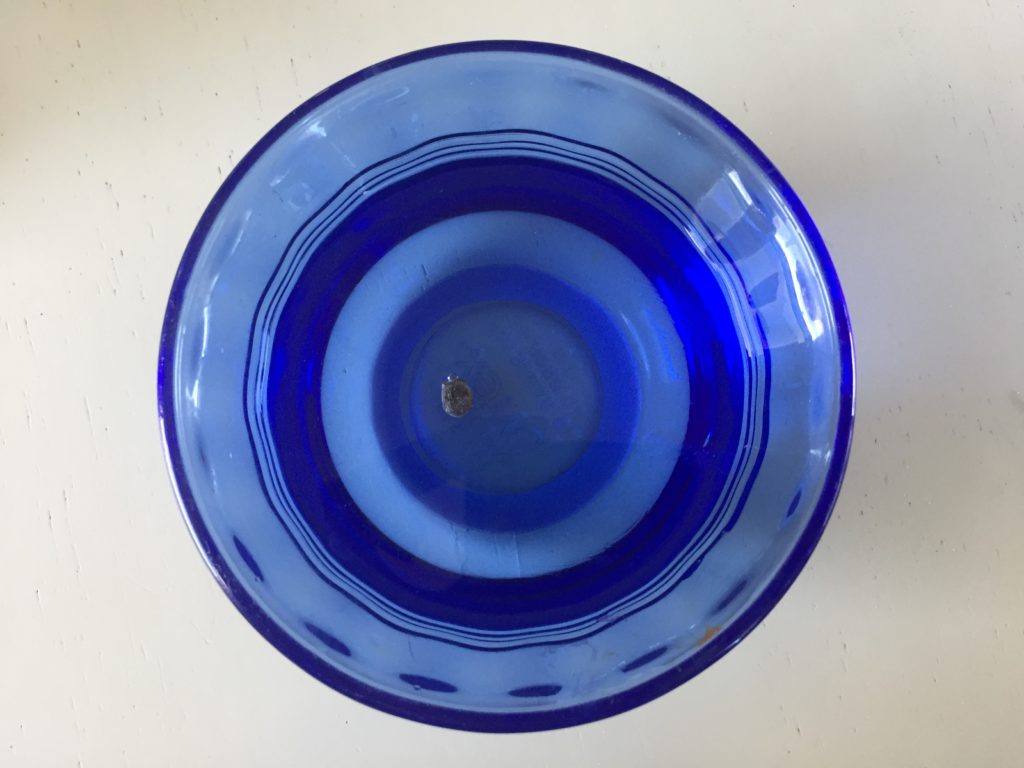 Fill your planter with fast draining, moist soil.  A cactus mix or gritty mix is recommended.  I use this Crump’s Greenhouse mix that is available at my favorite store.  Apparently, not available online.  I actually added some cactus mix to my grit just to make it a little softer, but it’s probably not necessary. 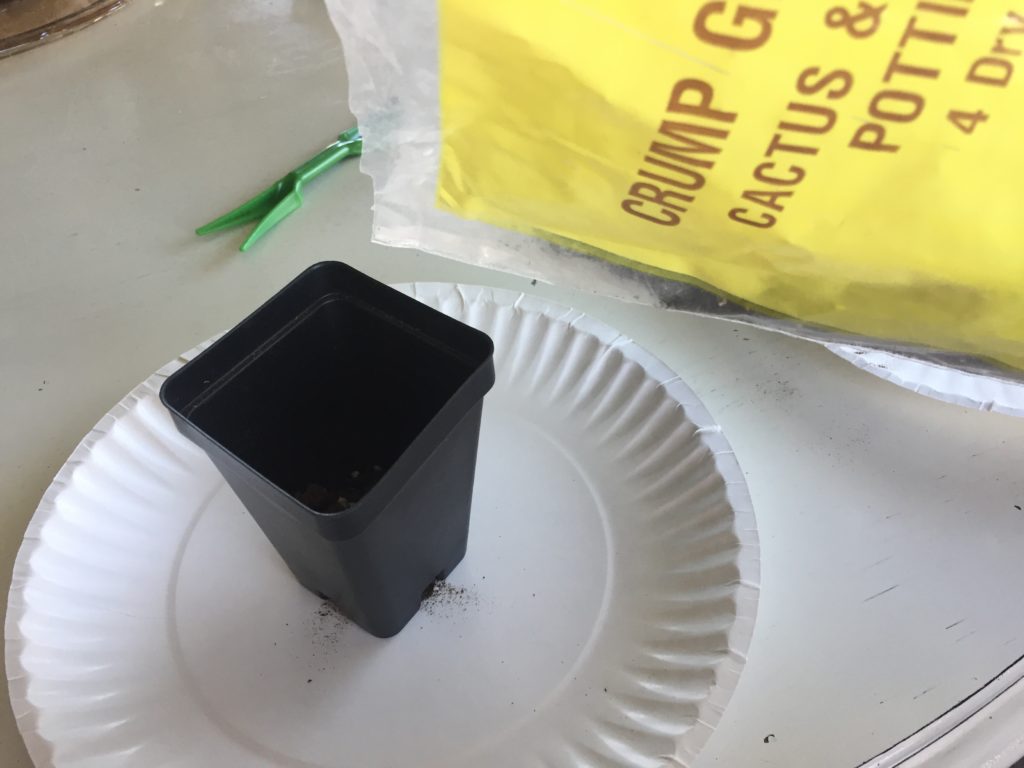 Wet your soil thoroughly and set your seed your seed on top of the soil.  Add a light sprinkle of your mix over the top.  I give mine a little spray to make sure the top is damp as well.  Don’t cover your seed to much.  You should be able to see it or at least tell where it is on top o the soil. 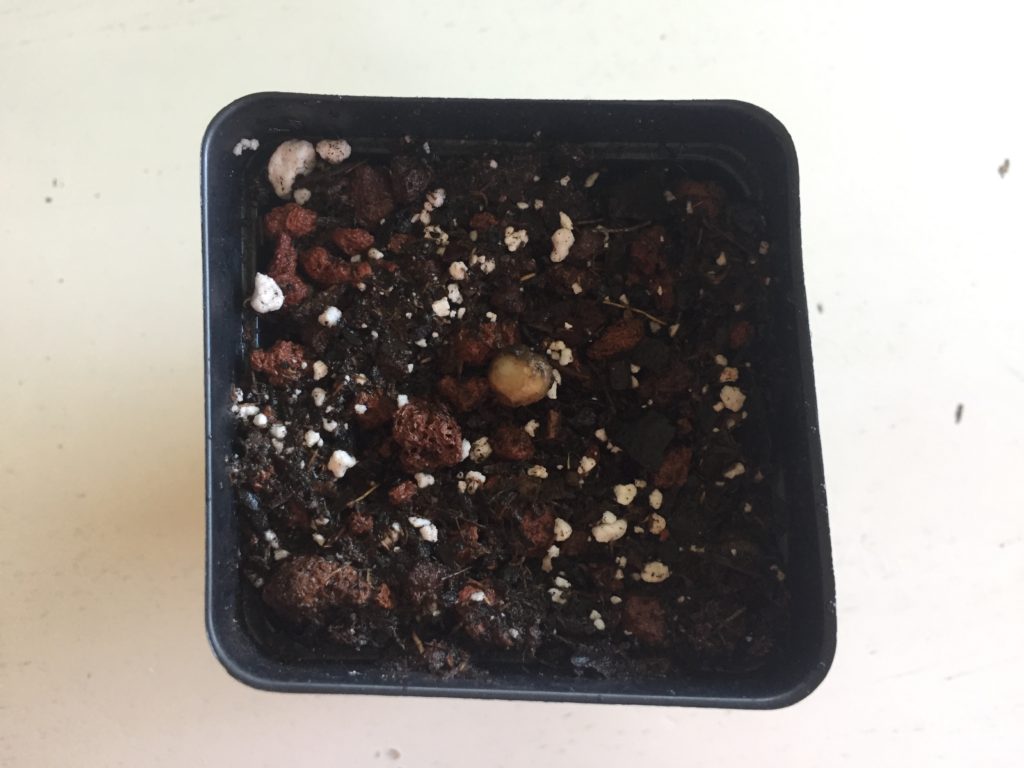 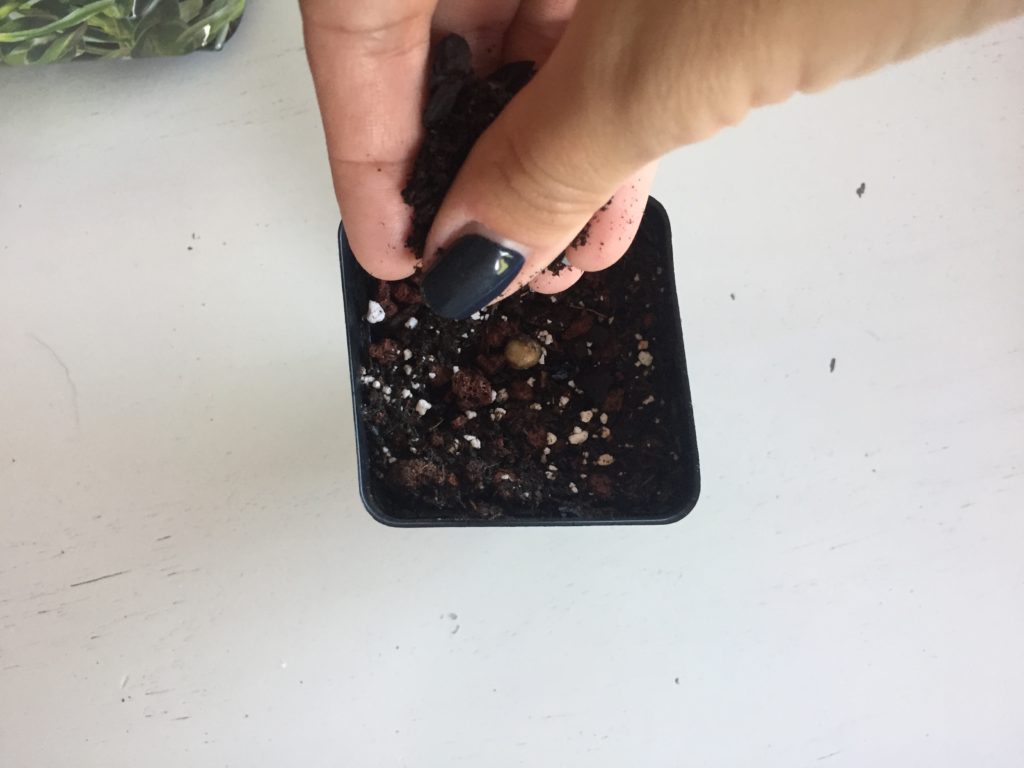 Cover your planter with plastic wrap or sometimes I use a plastic cup depending on the pot.  Whatever works for your container, just cover it up and wait for your sprouts.  Check back in a week or so when I update this post with sprouts…hopefully. 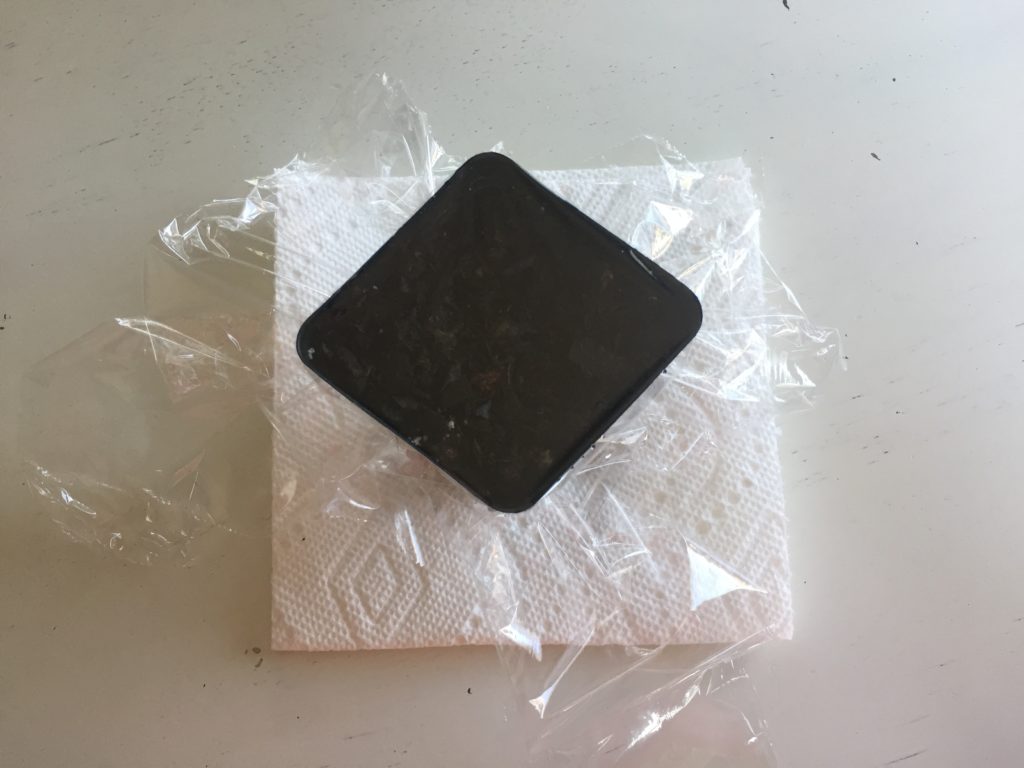 If you are interested in growing plants from seed, check out this post about cactus seed propagation.

Nothing has happened yet, except the appearance of white fuzzy mold.  Not to worry yet.  I removed the plastic wrap, gave it a little spray and back to the windowsill it goes. 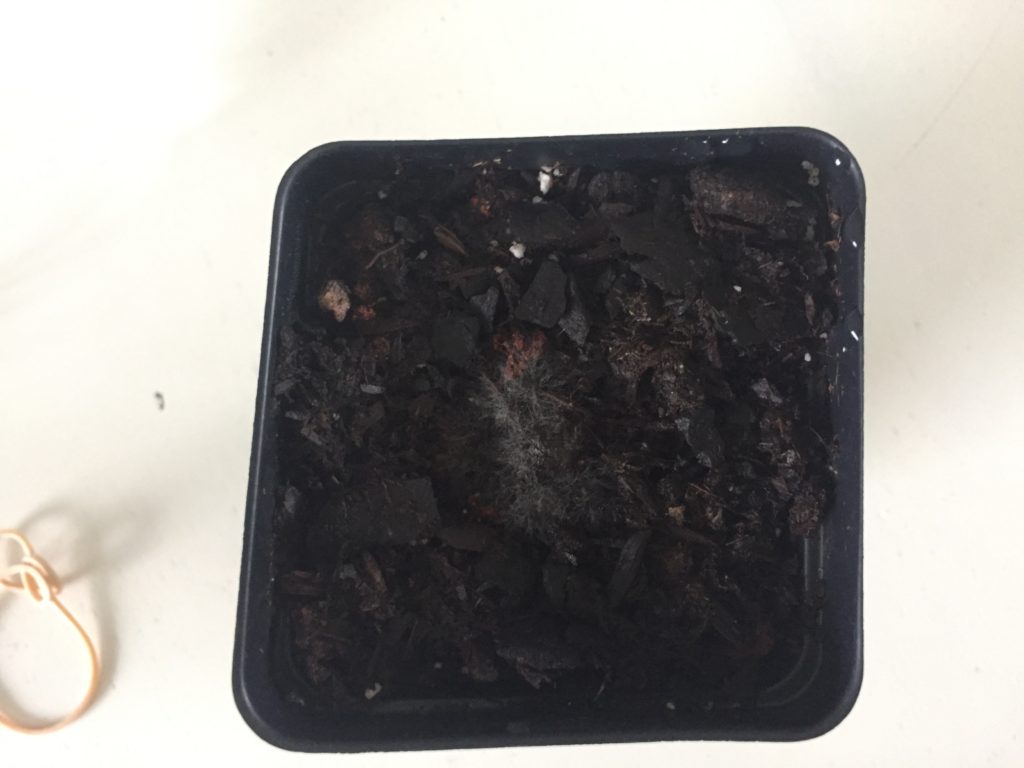 The Struggle is Real:

Nov. 6th – After one month and no seedling, I began to panic a little.  Is it not getting enough sun? Is the soil to dry?  Did I prep the seed properly?  Who knows, what’s going on.  I decided to try two more of my five precious seeds and set them up a little differently.  One seed I removed the enter outer shell and lightly scratched the surface with a clean razor.  The other, I removed half of the outer shell and scratched the surface with a clean razor.  This time, they were treated with a light sprinkle of sand as the top soil instead of cactus mix.  They were both wrapped in plastic and placed under a grow light set to a timer that would be on 18 hours a day.

After a month nurturing these seeds under the grow light, I had nothing.  It appeared that the seed in which I had removed all the outer coating had something brewing under the sand.  It had either germinated or it had fungus gnats.  I removed it from the grow light and brought it to the sill and a day later…a seedling.  One out of three isn’t all that bad.

I have not given up hope on the other two. I pulled them from their pots, rinsed them off, removed all the outer coating with my file, gave them new cactus mix with added perilite for drainage, a sprinkle of sand as a top soil covered them with a clear plastic topper and put them back on the sill.  Fingers crossed!

Here is a quick update for on how the past year has been for my little Masoniana. Of the 5 seeds that I had bought, I only got 1 to germinate. I lost a couple to fungas gnats and the last two just dried out and were no longer viable.

Growth is slow, but steady. I see progress in some new little leaves starting to come up through the center. I plant to repot in the spring and fertilize a little during the next growing season.

This week on the SuburbanSill channel I am talking

Now in stock, while supplies last, the amazing #ph

That leaf though! The #philodendroncongorojo is st

Back in stock #calatheaornata If you love pink p

This weeks plant is the lovely #rhaphidophoratetra